Today, Vote Housing releases its Platform Highlights and Survey Results – a review of where each of the five federal parties stand on the campaign’s six policies that will help solve homelessness and housing need in Canada. Our team did its own analysis of the party platforms and sent a survey to the parties to question them on our six policies further. We are releasing those results today!

Why is it so important the federal government act on ending homelessness and addressing housing precarity? Because the crises we see today was created by federal policy and divestments.

Beginning in the 1980s, the federal government began cutting affordable housing investment until in the mid-1990s they eliminated federal affordable housing programs altogether and cut transfers to provinces resulting in cuts to income supports, health care and other social programs. These cuts precipitated the rise of modern mass homelessness and the housing crisis we are in today.

In 1998 - watching the rise of mass homelessness in horror - a group of activists formed the Toronto Disaster Relief Committee (TDRC) and held a press conference in October to issue a ‘State of Emergency Declaration’ which launched a national campaign declaring homelessness a national disaster, calling on federal and provincial governments to create a national housing program. The TDRC was quickly joined in their call by the Federation of Canadian Municipalities and advocates from across the country.

After more than 19 years of sustained, fearless and relentless advocacy by the TDRC and a growing movement of communities and advocates (with important policy successes along the way), Canada finally announced its first-ever National Housing Strategy on November 22, 2017.

There are important lessons in this history. First, Canada’s housing crisis and the rise of modern mass homelessness were created by policy. Second, sustained, fearless and relentless advocacy has the power to change those policies.

Today, we have the federal government re-engaged in housing, we are in the midst of an election where housing is a top issue and for the first time in memory all parties have put forward housing platforms, over 360,000 units of aging social housing have been protected, we have billions in new federal funding for housing and the green shoots of progress in reducing and ending homelessness happening in a growing number of communities across the country.

But we still have a deadly and deep housing crisis in this country that has impacted millions of our neighbours that demands urgent and immediate federal action.

How can you vote housing?

Vote Housing stands on the shoulders of all the advocates who have fought for decades to end the disaster of homelessness and solve the housing crisis.

In a few short weeks, we have already had success this election:

This is an incredible accomplishment, but our work is not done as we prepare to hold the government to account after the campaign.

Because of you, Vote Housing has already moved the dial this election. But all of that is for not if we can’t finish strong this election. 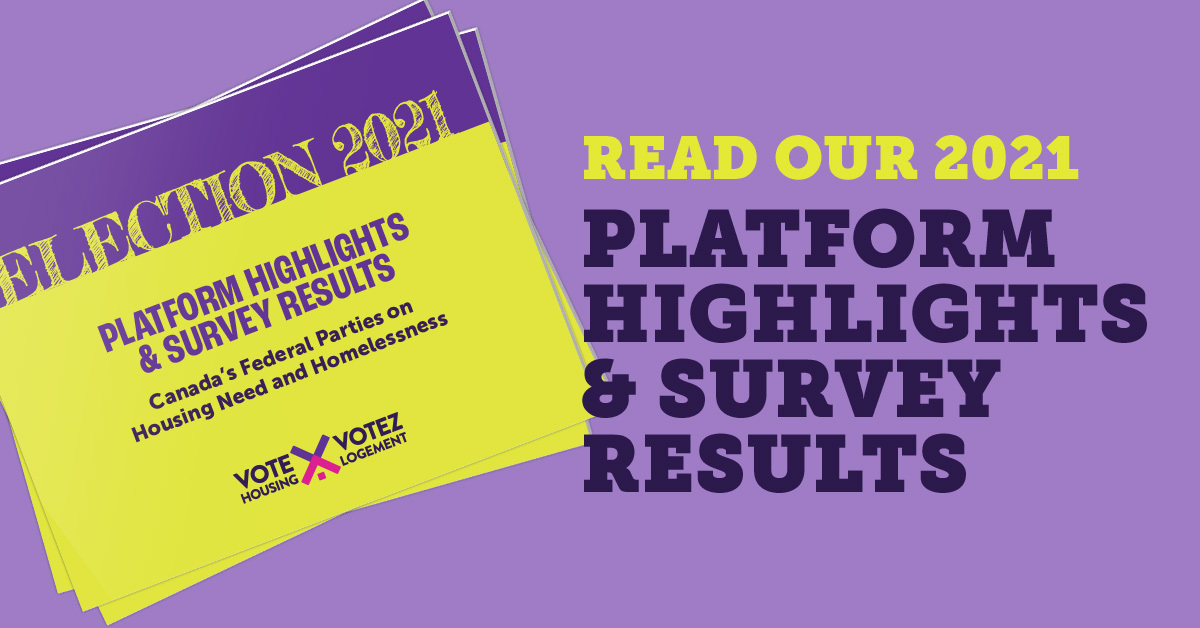